On Thursday May 17, 2012, our lab went on a bit of a holiday to the historic UC Berkeley campus (known to the natives as THE University of California, as it was the first) to attend the 2nd Annual Bay Area Symposium on Viruses. While the symposium granted the podium to a number of excellent presenters, my favorite was Joe DiRisi of UC San Francisco, with his talk Tales from Veterinary Virology: Why Snakes Go Crazy. Now, you might say that my bias is due to the subject matter, and, in part, that's true. The talk was an excellently presented summary of the process of virus discovery, from disease to sequence, to proving Koch's postulates (which, in their case, is still in the works).

The disease under discussion was inclusion body disease of boa constrictors (IBD- and not to be confused with irritable bowel disease, which is another issue entirely). Now, this moniker may sound rudimentary, but inclusion bodies are all we pathologists really see in association with this disease, which causes debilitating, invariably fatal neurologic disease in boids.

Until Thursday, I, like all other vets I know, did not have a clue what caused IBD (though some have implicated a retrovirus), other than knowing it was likely viral. So, imagine my surprise and delight to witness this presentation, which handed me the etiology, tied up in an elegant little bow: an arenavirus.

Arenaviruses have previously been described in mice (and humans), and are associated with large intracellular inclusions, as seen in boid IBD. The group was able to do extensive deep sequencing through some interesting serendipitous opportunities, one of which involved getting a large corporation to foot the bill for sequencing the entire boid genome. Once the genome was sequenced, it became possible to screen sequences amplified from diseased animals for virus by first excluding the host DNA. This sounds simple, but was impossible without knowing the boid sequence, and previously, the closest relative to have published genome-wide sequencing was a distant lizard.

Aside from the obvious coolness factor of this study, I had a primary interest in the presentation; it outlines exactly what my lab is trying to do with a carnivore polyoma virus. Now just to get it to work...residency project, here I come!

Last week, it was my turn to present an article in our Pathology Department Journal Club, and I opted to review a review. Here's the abridged version…

If you are one who keeps a finger on the pulse of global wildlife disease, you may have wondered why we’re seeing an apparent surge in emerging fungal diseases in recent years. A review published in the April 12 2012 issue of Nature provides a fairly comprehensive look at the question: why fungi, and why now? According to the authors, the answers lie in high fungal virulence, long-lived environmental stages, generalist pathogenicity, relative genotypic plasticity, and the effects of environmental drivers.

But first, let’s look at a few key players.

White-nose syndrome in bats in North America. Bats across the eastern US are dying at an alarming rate, and affected caves continue to be identified. As of January 2012, the Federal Wildlife Service estimated the cumulative death toll to be upwards of 6.7 million bats. The little brown bat, pictured above with the white fungus collecting on the muzzle, is one of the most common species in this region, and is considered by many to be at risk of extinction if this trend continues.  The etiologic agent, Geomyces destructans is related to soil fungi that haven’t previously been associated with infection of vertebrate hosts.

Chytridiomycosis, a cutaneous infection of amphibians by the chytrid fungus  Batrachochytrium dendrobatidis has been implicated in dramatic declines in amphibian populations everywhere these animals occur, resulting in 100% mortality in some isolated populations. Here, too, is an example of a species never before associated with infection.


Loggerhead sea turtles, already an endangered species, are further threatened by infections with the fungus Fusarium solani associated with failure of egg clutches and weak hatchlings.

Other examples cited in the article include fungal agents associated with declines in coral species, honeybees, crayfish, and a host of plant species.

Certainly, emerging fungal infections have been making headlines; however, are they really increasing? The authors conducted a retrospective study of reports published by two large epidemic/health monitoring services, ProMED and HealthMap, and found that yes, in recent years, the percentage of reports involving fungal pathogens in animals has increased, by up to 3-fold. A literature review also indicated that of the reported extinctions and local species extirpations directly due to disease, fungal agents were the most commonly implicated pathogens, with chytridiomycosis being the single most common causative infection.

Contrary to the mounting concern of the threat of fungal epidemics, our traditional view of fungal disease typically considers these to be opportunistic pathogens, with immunocompromised individuals being the population at risk. This begs the question: are emerging fungal diseases an indication of other underlying conditions? Researchers have asked whether fungal diseases are becoming more prominent now due to environmental stress associated with such factors as pollutants, habitat destruction and forced migration, climate change, or other primary underlying unidentified pathogens (eg. Viruses). While this question persists, more and more evidence indicates that, at least in the case of Chytrid and WNS, the fungus is looking like the sole culprit.

We don’t know yet why fungi seemed to be finding an expanded niche as primary pathogens in global populations, and whether this trend will continue to increase remains a mystery of some concern.

Asilomar and the alligator TMJ


Together with the attending UCD vet students, we made up more than half of the body of presenters. My case presentation concerned an alligator with a laundry list of ailments, but the slide I submitted for review was a transverse section of the articular process of the quadrate bone of the skull. This process is a condyle that articulates with the articular bone of the caudal mandible to form the 'jaw joint' of the crocodilians.

While you might be stellar and recall the list of criteria that makes a creature cool enough to belong to the elite club of Mammalia, it's easy to forget that a key defining feature is the temporomandibular joint (TMJ). Known largely to the lay person as a frequent site of cranial pain, this joint is formed by the articulation of the mandibular fossa in the temporal bone and the condylar process of the mandible. Between these bones is the articular disk, which makes this joint so unique. The structure of this joint allows for both hinge and lateral motion of the joint, and enables the mammal, be it a human or a cow, to both prehend and grind his/her feed.


In contrast to we fur-bearers, our distant reptilian cousins lack an articular disk, but have an array of nifty jaw gadgetry themselves. They run the gamut from the squamates (snakes), who can ‘unhinge’ their jaw and thus swallow food several times the diameter of their head, to the crocodilians, whose craniokinesis is limited to a strict simple hinge jaw joint. Of course, for them it makes sense- why waste an iota of energy on lateral sway when you can combine the efforts of every associated cranial myofiber to snap your prehistoric maw shut?  Of course, from our anthropocentric view, their TMJ counterpart is also curiously upside down…

These images are from the amazing Holliday lab at Missouri, where they have constructed a 3D virtual alligator skull. Note that in direct opposition to the mammalian system, it is the mandibular articular bone which receives the condylar process of the quadrate bone of the caudal skull. In effect, the crocodilian skull is lifted, while the mandible remains relatively static. Thus it is both the power of the reptilian masseters and the potential energy of the elevated massive skull that combine in a very powerful SNAP.

But, I digress. Back to our patient…a middle-aged male captive alligator who died following several months of decline. At post mortem it was noted that his jaw had limited range of motion. On close examination and histopathology, there is a severe degenerative arthropathy characterized by extensive cartilage loss with replacement by fibrocartilage and fibrous connective tissue. To illustrate, look at the normal articular surface from a growing mammalian femur, below. Consistent with the life stage, the cartilage is hypercellular, but note the smooth surface, even thickness, and general organization. Beautiful, really. 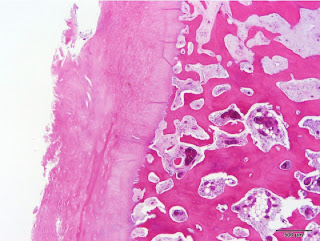 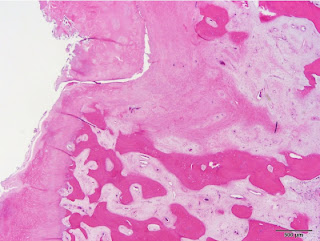 So, what does this have to do with anything? He’s a captive animal, so food apprehension shouldn’t be a problem…but did I mention that part of his presenting complaint involves something of a social coup? Our patient was once the top beast of the social hierarchy of his group, and in the months prior to his death, he increasingly became the brunt of attacks by his previously subservient brethren. 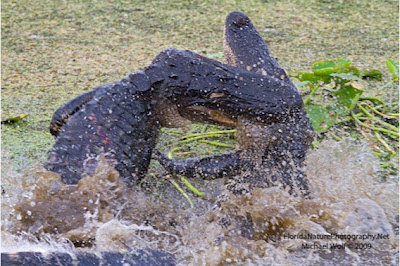 In many species, including our own, non-violent demonstrations of prowess provide an invaluable role in asserting dominance without the need for injury to either party. Think fluffed kittens and large antler racks on dominant bucks. The same holds true for crocodilians, which utilize a mouth gape display, as seen below, to cow their inferiors. 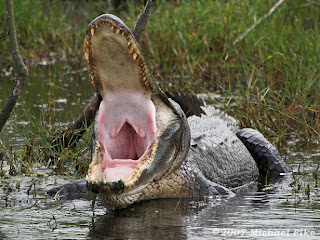 The keepers of this particular alligator noted that he had not gaped in the months prior to his death, despite frequent attacks by his fellows. Of course, we can’t rule out that he had other reasons to be seen as weak by his cohort. During the months of his decline, he developed infected wounds, and eventually a fungal pneumonia. The photomicrograph below depicts fungi within a pulmonary granuloma, with hyphae anchored in the parenchyma and flowering out into the air capillary. Like tourists at the beach. Nasty, really. 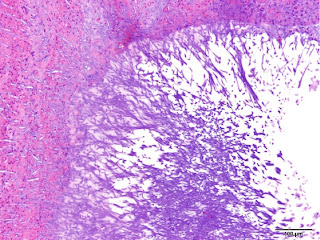 And among other changes, he also had extensive renal necrosis and numerous urate tophi. The tophi are mineralizations likely secondary to acute antemortem dehydration. The necrosis is a possible sequel of synergistic effects of antimicrobial/antifungal therapy and dehydration. See one tophus below. 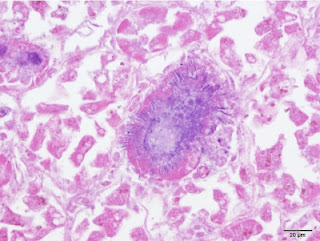 It is not clear whether the degenerative changes in the jaw joint played a role in the decline of this animal. However, this case highlights the importance of a thorough post-mortem examination and knowing your comparative anatomy and the relative importance of lesions to a particular animal’s life history.

Interesting case! More later…
Posted by Sabrina at 12:03 AM No comments: